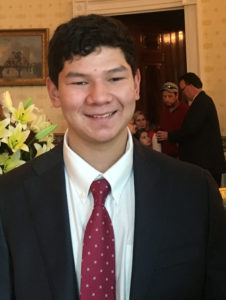 TO SURVIVE, WE HAVE TO BAND TOGETHER
Teenager Helps Out Pantry
APRIL 7, 2020
BY | RICK MURPHY

To survive, we have to band together. An East Hampton teenager took that message to heart after hearing locals were going without food and supplies. So, last week he decided to do something about it.

“My father was telling me about the empty shelves in our local grocery stores, and he heard about the serious need the East Hampton Food Pantry had,” Jerry Simons Jr. said.

After donating $70, he said he was convinced to start a GoFundMe campaign.

The junior at East Hampton High School is now working with Vicky Littman at the food pantry to further his cause.

Once the GoFundMe campaign ends, in about 10 days, the food pantry will get a lump sum, Simons said.

“Thanks in advance for your donations,” Simons Jr. added. “Any donation will help make an impact.”